The Warrawoona Gold Project located in the Pilbara Goldfield of Western Australia, is one of the highest margin and significant undeveloped gold projects in Australia. 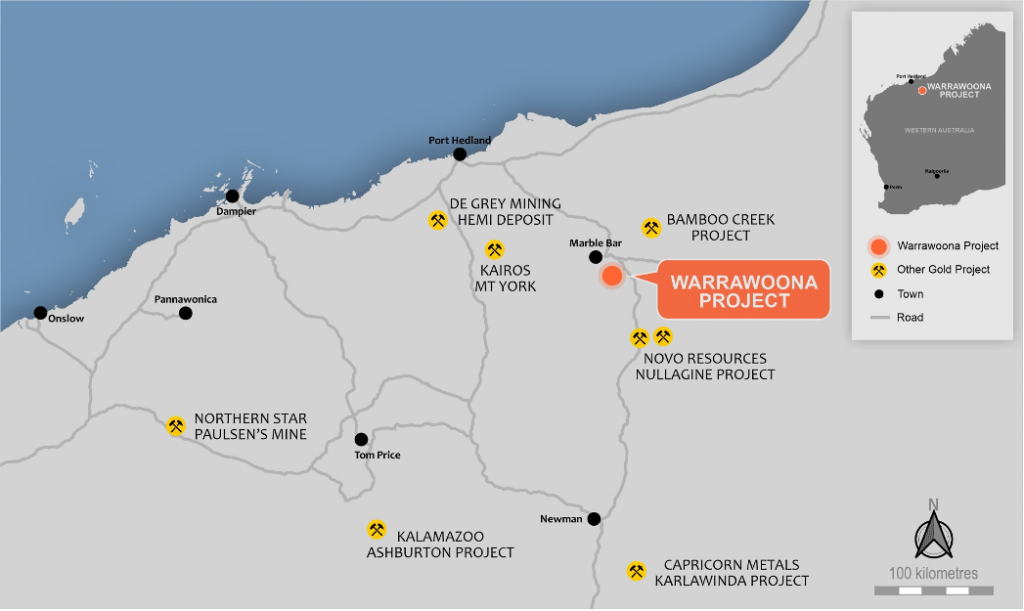 Historically fragmented ownership has held back development of the area. Calidus now controls the entire Warrawoona Greenstone Belt with a total of 780km2 under its control. Since listing in mid-2017 with a resource of 411kozs, the Company has undertaken a systematic modern approach to exploration and tripled the resource base to its current 1.5 million ounces. 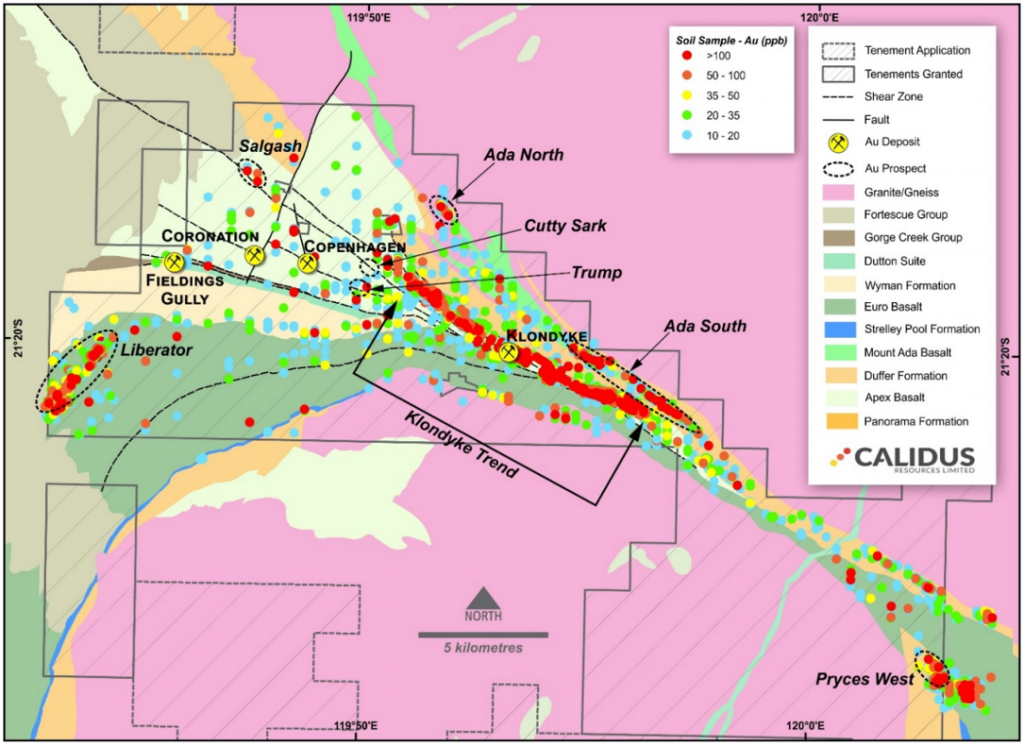 The mining leases comprising the Klondyke Prospect lie within the Warrawoona Gold Project, one of the oldest greenstone belts within the Pilbara Craton.

Independent consultants Optiro and Widenbar & Associates completed a resource update in June 2020 to derive a 2012 JORC compliant total Resource of 43.7Mt @ 1.06g/t Au for 1.5 million ounces and includes 1.1 million ounces in the Measured and Indicated Category (announced by the Company on 29 June 2020).

The resource is currently defined over 5km of strike and is open along strike and down dip. Following the release of the Company’s Feasibility Study, ongoing drilling will target both the along–strike extensions and down–dip potential of this large mineralised system that outcrops at surface.

The main Klondyke shear hosts extensive old workings and has been traced for over 12.5km in length highlighting the large upside of this structure.

Calidus completed a Feasibility Study (FS) in early September 2020 confirming the Warrawoona Gold Project will be a robust operation with strong financial returns.

The compelling technical and economic outcomes of the FS have led the Board to immediately approve the commencement of early works. The early works include the site access road, installation of the 240-room accommodation village, establishment of the communications network and installation of water bores that will be utilised for construction, dewatering and production.

The early works programme is designed to provide the backbone of infrastructure ahead of the Final Investment Decision and the completion of permitting to facilitate main project construction.

Orders have been placed for long lead items, including the SAG mill, in preparation for the commencement of the main Project construction in the March Quarter of next year.

The key production metrics and financial outputs of the FS are outlined in the table below:

The Company controls the entire Warrawoona greenstone belt and has over 200 historic workings on these tenements.

The Warrawoona syncline is one of the largest greenstone-hosted goldfields in the East Pilbara, Western Australia. The currently explored gold deposits are composed of quartz lodes within three main regional shear zones: the Klondyke shear zone, the Copenhagen shear zone and the Fielding’s Find shear zone. The sub-vertical shear zones present impressive networks of quartz/calcite/sulphide/ankerite veins and are locally lined with heavily brecciated fuchsite sericite-pyrite bearing mafic rocks. Visible gold is often observed in quartz veins throughout the mineralised package.

In early 2018 it was recognised that historic geochemistry coverage on prospective regional shear corridors to the north, south and west of the main Klondyke-Coronation-Fielding’s Gully trends was very limited. A total of 6,363 soil geochemistry samples were collected during 2018. The results were promising and outlined a large number of +100ppb Au in soil anomalies across the tenement package including:

Recent aeromagnetic and radiometric surveys have also identified 95 targets, 22 of which Calidus considers to be high priority. A large portion of these targets lie on an undrilled shear to the west of Klondyke.

Historical mine located 10km from the Klondyke Prospect hosting a 2012 JORC Code compliant Indicated & Inferred Resource of 0.3Mt @ 4.54 g/t Au for 43,000 ounces. The prospect remains open along strike and down dip. 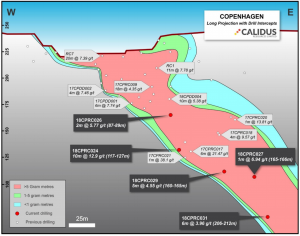 The Coronation deposit lies within mining lease M45/672, approximately 15km SE of Marble Bar. It forms part of the Warrawoona Gold Project and was initially discovered during the Pilbara gold rushes of the late 19th century when limited small-scale mining was undertaken. Mineralisation at Coronation is hosted in quartz pyrite stringers within hydrothermally altered quartz–sericite schist, and chert and BIF horizons.

Modern exploration commenced in the in the early 1980s, with a joint venture between Seltrust Mining Corporation, A1 Consolidated and Monarch Petroleum. The JV undertook surface mapping, rock-chip sampling and a number of shallow percussion holes confirming the presence of gold mineralisation with a strike length over 1,000m to a depth of 20m.

In October 2020, twenty-nine RC holes, designed at a nominal spacing of 20m x 20m (along strike and down dip) were drilled to test the potential to extend the current Mineral Resource along strike to the southeast. All intercepts from all the holes are contained in Table 2. Ore-grade gold mineralisation is present from surface over a strike length now of approximately 800m to a depth of 150m from surface. It remains open at depth and along strike to the southeast where sparse drilling and surface mapping suggest the mineralised structure continues.

Significant results from recent and historic drilling at Coronation includes: 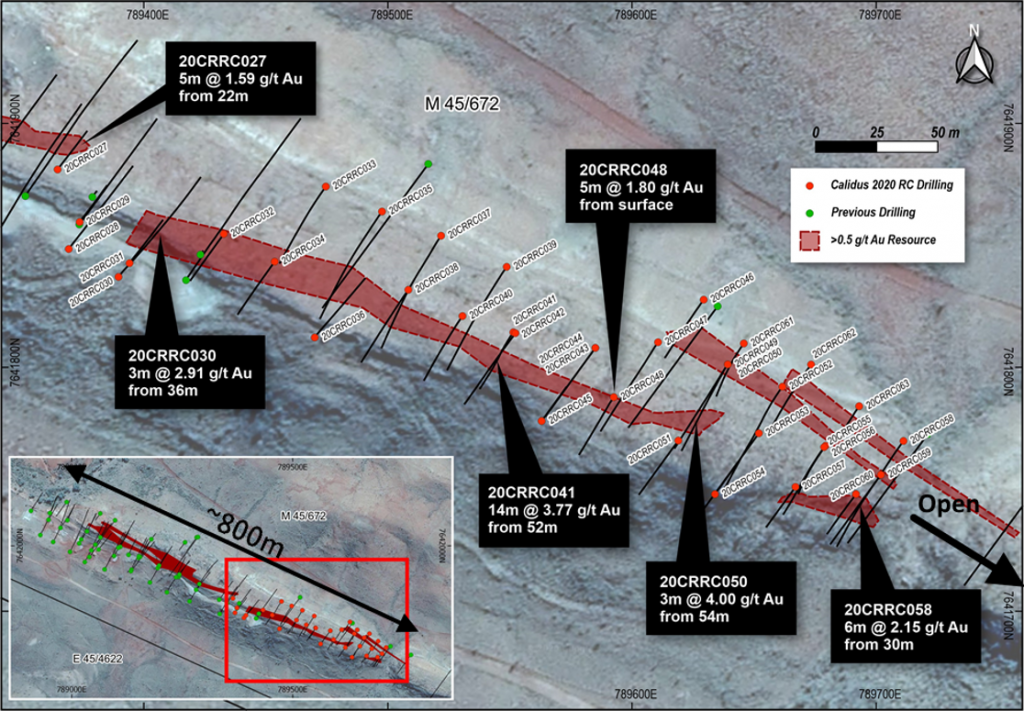 The Fieldings Gully historical mine is located 15km from the centre of the Klondyke area hosts a 2012 JORC Code compliant Resource of 0.6Mt @ 1.84 g/t for 36,000 ounces. The prospect remains open along strike and down dip.